Fallen Leaf Lake is just south of Lacamas Lake, west of Round Lake.  The park has a beach area and large shelter available for reservation for events.  The trails here connect to several others connecting to nearby neighborhoods.  The TrailForks App has this area well mapped.

There are a few spaces for parking at the park entrance.  An alternative is to park on NE 23rd Ave and walk around the Fallen Leaf Softball Field to reach the park trails.

The LeRoy Haagen Memorial Community Park includes a few trails that loop around the fields and through the wooded area.  The parking lot at the end of LeRoy Haagen Memorial Drive has plenty of parking, but the park can also be entered from NE 130th Ave, NE 129th Ave, NE 11th St or three places along NE 9th St.  Walking the outermost loop of the park trails takes you just shy of 1 mile.

Be aware that while there are many trails to explore in the wooded area, last time I was there I saw two camps where someone had their tent set up in the densest areas.

The Heritage Trail runs the length of Lacamas Lake (3-1/4 miles).  This is a very popular jogging path.  Gravel and well maintained the full length.  On wet days there are quite a few puddles and some muddy leaves, but nothing difficult to get past.

The parking lot at the north end often fills up, with some people resorting to parking along the curb and on the passing road.

A good walk or bike ride is to start at either Pleasant Valley Community Park or Vista Meadows Neighborhood Park, walk through the WSU campus then up to the other park, turn around, and return taking another trail through WSU along the way.

The Salmon Creek Greenway Trail offers a nice long walk or ride within the urban area of Vancouver.

La Center’s Heritage Trail follows a wetland area for storm water management and at the west end walks through a stream-side forest corridor.

There are multiple access points for the trail, and it can make for a nice leisurely walk.

If you are walking east on the Heritage Trail, when you reach E Heritage Loop, turn right, then left onto E 14th Circle.  At the end of E 14th Circle you can continue onto the path that leads to the Brezee Creek Trail.

Located in La Center, connecting from E. 4th St near the Middle School going a little over a half mile up the creek valley to E. 14th Circle for a 190ft elevation gain.

Portland’s Marine Drive has a bike path along several miles, but there is also a trail that can be walked that lies between the Marine Drive bike path and the river’s edge.

There is space for several cars to park at the west end of the Marine Drive bike path by 33rd Ave.  An underpass under 33rd Ave makes it easy to park here and either walk or bike to the east.

Broughton Park has a large parking lot, with a fee for parking.  From here, you have options for walking to the east.  Follow the paved bike path, the dirt trail, or the sandy beach (depending on water level).

The dirt trail can be followed about a mile and a quarter to the east.  The paved bike path goes about 4 miles to where it then connects with bike paths along I-205 going south and north crossing the Columbia River.

An interesting bike ride is to start at 33rd, follow the bike path east, then cross the Columbia River and turn around when you reach the neighborhood streets in Vancouver.  This makes for a nearly 16 mile round trip on a separated paved bike path that only requires 2 crossings of Marine Drive in each direction, and no other street crossings.

Starting on the Washington side of the river, there is space for a few cars to park at the end of SE 23rd St.  From there, follow the I-205 Multi-Use Path across the Columbia River.  You can choose to take the path along Marine Drive, or south along I-205.

This is one of my favorite places to go for a good walk.  Several trails loop around the park, allowing you to not only make a loop hike, but to loop around the Lake three times without walking the same trails twice.

Most of the outermost trails are open to horses and mountain bikes, and are also easy trails for walking.  The trails closest to the lake are closed to horses and bikes, but can also be difficult to maneuver if you have any trouble with rough terrain.

The State Park charges a day use fee or Discover Pass.

The smallest loop around the lake will take you about a mile and a quarter (including the walk from where you park), and the largest loop is about 2-1/2 miles.  The park trails are pretty well mapped in Google Maps.

In addition to trails around the lake, there is the Chelatchie Rail Trail, a 1 mile paved path following the railroad to the east of the park.

This short loop trail is a flat paved walk of just over 1 mile for the full loop.  Note that when crossing Andresen Road, you need to either cross at the marked cross walk near the trailhead, or walk a half block north to 18th St and cross at the lighted intersection.

There are three places to park for this trail.

The Burnt Bridge Creek Trail extends both west and east of the Discovery Trail.

Each pin on the map is a blog entry.  Numbers are clustered entries.  Tap to zoom in to see all entries. 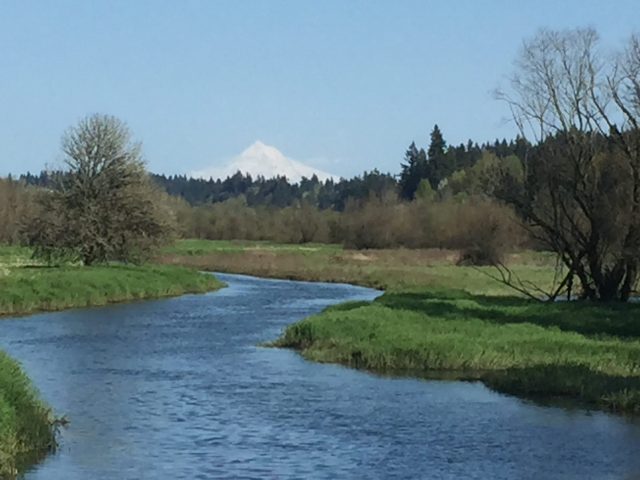